Not pretending, ignoring, or embracing, just keeping in mind


Lately I've been reading some blogs written by parents who also have children with Down syndrome  (okay, the usual ones about therapies and resources and such, but also Kelle Hampton's blog - Enjoying the Small Things - which really isn't about life with a kid with Down syndrome, but just about her life with her two daughters one of whom has Ds) and pondered about this whole deal about not letting Down syndrome define your life, or who you are.

And I agree. Kind of.

I don't want to pretend like the diagnosis isn't there. Like we're a typical family with a typical child (she's normal, just not typical). Because we're not. Never have been. Not even before the Babe came along. Down syndrome is just one more tangle in the frilly yet oddly discolored panties we call our everyday life.

I would hate to, even for a second, forget what it means to have a child with developmental challenges, and not give her the aggressive stimulation and help she needs to move forward on her developmental path (So that the world may later not see that she ever had those challenges). Even as I sit here on my bed with the MBP warming my loins, writing, I'm constantly glancing at the Babe, no longer to make sure she's breathing alright (that only happens at night, all the time), but to make sure her mouth is closed, she's breathing comfortably through her nose, and that her tongue is securely positioned completely inside her mouth. Am I being vain and don't want her to grow up and have that open-mouth-with-the-tongue-sticking-out thing very much associated with Down happening? Not really. I couldn't care less if her mouth was constantly open and her tongue stuck out - that's just looks - as long as it didn't also imply difficulties in communication later on, in producing speech. Just check out this article: The Oral-Motor Myths of Down Syndrome. (Poor Babe though, her mom is the worst mouth-breather ever, so she's got that going against her...)

Let's face it: If people have a hard time understanding what you're saying, they really can't be bothered to listen. Or worse, they're going to think you not only have difficulties in producing the actual speech sounds, but that you cannot communicate on the level of ideas and concepts either. And I'm fairly certain, since she has me for a mother, there will be sufficient ideas and concepts in the Babe's future. A veritable flood of ideas. More than enough. I would imagine. And she'll probably feel the need to spread them too. Aggressively, and with some poignant swearing here and there.

I don't want to live my life ignoring something that cannot be 'cured', 'treated', or done away with. There's no ejecting that extra chromosome from every cell of my tiny daughter's body. The chromosome is there. It's a part of her and always will be. It is a part of the genetic puzzle that makes her... her (just with a healthy dose of that dubious thing called nurture thrown in also). And most of all, it has already given her some specific features which tell everyone she'll ever come in face-to-face contact with that the chromosome is there. She'll have to know and understand that the chromosome is there and that it is the reason people will sometimes act funny, or mean, or patronizing, or overly friendly and sweet around her, and not because of her.

But I'm not embracing Down syndrome either. I am making it my thing, but my things also number coffee, wine, and Angry Santa who's Finnish, so there. Recently I've been ordering a lot of Down syndrome merchandise. Soon, I'll be up to my knees with tops for myself, the Viking and the Babe that say 'Chromosomes - my kid has more than yours', 'Syndrome of a Down', 'Got Trisomy', 'Down Syndrome - Support, Educate, Advocate', 'Celebrate Neurodiversity' and the piece de resistance, something that I designed myself (but truly doubt I was the first one to come up with it) 'I don't discriminate. Even if you only have 46 chromosomes.' I'll wear every single thing I can fit into, and will do so proudly. But I'd never, ever wear a top saying 'My daughter is cool because she has Down syndrome.' I mean, come on! I'm sure my daughter will be special (as am I, it's only the Viking's true specialness that's ever been in question, although he does like his beard a little too much and insists that his freaky toe is nothing out of the ordinary, so...), but we're still waiting to see whether that little something that will set her apart will be her dry wit (fingers crossed), infectious laughter (or possibly my loud one that makes people turn around in a crowded restaurant looking for the drunken sailor), tendency to feel passionately about things and make others do so too, love for those who don't really get any love otherwise, singing voice (this one's a stretch, all things Viking considered), sense of style, or something completely different. Something we had never imagined our offspring being into (beauty pageants?) Never Down syndrome. I'd never put the Babe into a tee that says 'Angels are made with 47 pieces' or the Viking in one that says 'I'm thankful to be a parent of a child with Down syndrome'. No! My daughter will only be an angel if that's how she's brought up (fat chance there cowboy), and we're thankful to be her parents, because, well, she's our daughter, and she exited through a gaping slit on my stomach (if that don't make you love someone, I don't know what will), not because she has Down syndrome.

She doesn't have to be special to anyone else but us. But we have to always remember just how special she really is.

We don't mind her extra chromosome, but we always keep it in mind. 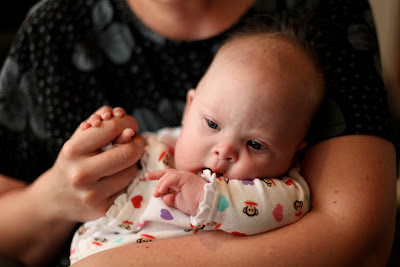 This is exactly how far you can throw me: The Babe intently focusing on the MBP screen while Mama surfs the internetz.
Posted by Extranjera at 5:48 PM 4 comments:

Email ThisBlogThis!Share to TwitterShare to FacebookShare to Pinterest
Labels: as usual a good avocado puree tastes delicious, I love her so much already, my daughter shows great talent in the smelling good department
Newer Posts Older Posts Home
Subscribe to: Posts (Atom)