Not drowning, but not swimming with ease either. That's where our family is right now. We're out on open waters, the ship finally sank a while back, and we're treading water, taking turns holding each other up, all the while the waves are getting bigger and bigger. And wait, was that an ominous fin I just saw surface over there?

And Down syndrome isn't even on the horizon. We're uncomfortably afloat on the severe Central Sleep Apnea sea.

And a thousand other things. Big and small. Some insignificant and others seriously life-altering. Some completely imagined and outrageous and others a reality in the future.

Then, as life moves along, there is actual stuff you need to deal with. Such as what to do with the low muscle tone, the differential treatment, the restless sleep, the developmental delays, the sensory issues, being looked at funny, the semi-constant respiratory illnesses, hearing loss, the wildly erroneous stereotypes, vision problems, people first language, and so on.

Or maybe you don't. Maybe your kid with Down syndrome doesn't have or have to experience any of the issues linked to Down syndrome, or maybe she'll have and meet many of them. There's no way of knowing.

As with any child.

Sometimes the universe decides to remind you that your kid is just a regular kid. Remind you in the nastiest of ways. "Yes," the Universe will scream at your face, "she might have Down syndrome, but she's still just a kid, and I can take her down if I so desire."

Your tiny one is hit with a health problem that has nothing to do with Down syndrome. A mysterious one at that. The kind that makes you wish Dr. House was real and could crack this fucker right open. And heal whatever was ailing your precious little baby.

Rip you out of every parent's nightmare that could take over anyone's life.

Still, While you're spitting out salty water you take a look around and realize that, yes, while you are kind of fucked and that a boat passing by might be a while still, you are in fact afloat.

You are not drowning because you are so damn lucky.

You have on a fancy life vest that covers every medical expense and there's all that stuff that came off the boat before it sank that went to quality medical schools and will take your every single call.

You have that special someone treading water right beside you and not hogging the piece of floating wood like that rich chick in Titanic. You take turns.

You learned to swim early on and you know you can keep swimming for quite some time still. And the little one is proving to be an excellent swimmer.

You realize that things could be so much worse. And for many they are. And that you are so fucking lucky. 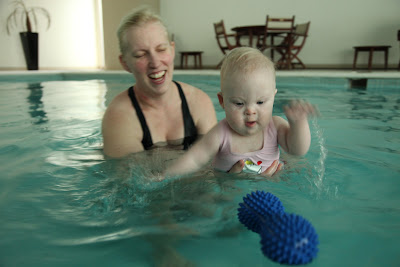 This girl loves water. That's why she's hitting it.
Posted by Extranjera at 2:05 PM

Email ThisBlogThis!Share to TwitterShare to FacebookShare to Pinterest
Labels: afloat like a dead fish, can you tell i majored in metaphors, lucky chickadee, things could really be much worse I tell you