Good intentions get you blacklisted in my hood

Our friends are awesome.

Our friends have hopped onboard this flimsily constructed barge (I thought it was miscolored, frilly panties in a tangle, but whatevs?) we call our life and are genuinely understanding, delighting, attempting really hard to never hurt, even by accident, celebrating, being supportive in the ways we specifically wished for, rejoicing, and loving us, for us, to us and with us.

Our friends have good intentions. But they also have educations and understanding.

And in our world the former can no longer exist without the latter two.

The other day I saw a picture circulated on Facebook. It was a nice photo of a girl and a boy. The girl had a cocktail dress on and the boy was wearing a suit and tie. The two of them were smiling, maybe making a face, and proudly showing what I understood to be the Hook 'em Horns sign (or something to do with death metal, who really knows?). The caption indicated that they were going to their prom. The boy had Down syndrome.

I smiled. To me the picture looked like any other slightly quirky prom shot with teens posing in their Sunday best, but still being the teens they are.

Then I made the mistake of reading the comments. One should never read the comments. On anything. Because that's when the humanity catches up to your good mood and pees all over it.

Oh, apart from a few trolls who always seem to peek out from under their selected rocks (oppressive father's basement and behind a badly pockmarked face?), there wasn't anything in the comments that was especially cruel or mean or nasty. Outright.

There were good intentions. Nice words, commendations, God bless yous, and congratulations to the girl's parents.

Because obviously (please note the dripping sarcasm here) the girl would never have gone to the prom with a boy who has Down syndrome if she weren't doing it as an act of charity. Because she pitied the boy. Because her parents had brought her up to be kind to those less fortunate. Because she wanted to give someone who would never ever be asked on a date the "best day of his life".

This was painfully clear to those who commented on the picture. There was no mention of who the couple was, what their reasons for going together were, or what they thought of the situation. Nonetheless, the automatic assumption wasn't that they were going together because they liked each other or were friends, which would have been the case had the Down syndrome never been evident from the picture. The instant assumption most of the commenters made was that this was a favor.

That would surely secure her a safe ascension to heaven when her time came.

The boy wasn't a boy. He was just Down syndrome.

Now, I would like to believe that they were going together because they liked each other and wanted to go together. Because maybe the boy is funny, or witty, or has a good heart, or is an awesome prankster, or is one of the cool kids, or sings like an angel, or has good hair, or smells nice, or can fart/ burp the alphabet, or can keep a secret like no one's business.

Or maybe the girl's a total airhead and no one had asked her and the boy was doing her a favor.

Please. Next time you see a person with Down syndrome, just see the person.

Especially if you're looking at my kid, because, in her case, I'm part of the package and I'm not letting good intentions slide. Not now, not ever. 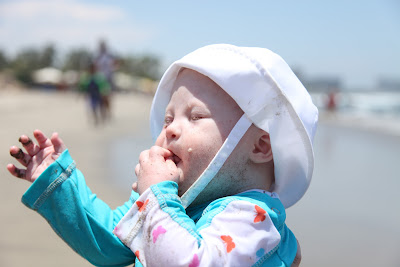 Would Down syndrome eat Acapulco sand?
I doubt it.
My daughter would.

Email ThisBlogThis!Share to TwitterShare to FacebookShare to Pinterest
Labels: I've been tweeting about poop a lot lately but i managed this post without one mention so i had to make it part of the tags to keep the momentum