What? Was I yelling?

Let's get one thing straight:

You do NOT have to accept my daughter because she has Down syndrome.

She does NOT need to be coddled because of her intellectual disability. Coddling and understanding are two vastly different behaviors.

It does NOT make you a good, tolerant individual if you accept my kid because she has Down syndrome.

She is no more different than any of us are. She is just as different as all of us.

Maybe you didn't catch me the first time:

She should be fully accepted and included by everyone because she is a fellow human being and until she proves that the acceptance and inclusion were the wrong things to do - let's say she robs a bank at gunpoint or poisons her elderly yet wealthy husband's plate of porridge - and has to be removed from society into a prison, she should be accepted as as much of a member of society at large as you and I.

Deal? Am I getting through? Can we agree on these simple details about who is human and who is not and what that means, and get on with the posting of pictures of Babe covered in food, or playing with her pretend aquarium? Yes? 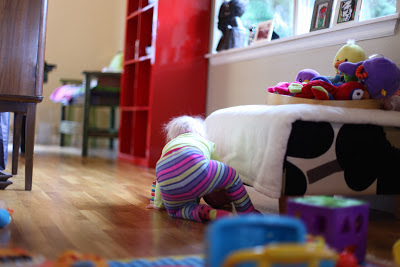 This is someone going to places (or at least the kitchen) as long as you let her.

Posted by Extranjera at 1:44 PM