I'm part of a revolution. I really am (with admin rights to a Facebook page and all that fancy stuff - my first ever. Hrm. Cough. Yeah. Both revolution and admin rights. I know, I'm cool like that).

The Down Syndrome Uprising.

It began here at a typical son, and is becoming something even more awesome here at the DSU Facebook page.

And here and here.

(In case you're wondering, I'm pointing to my heart and then to my head.)

I know my reality is not your reality, but I also think that there's a lot out there that isn't anyone's reality, or was someone's reality a lifetime and longer ago. And that needs to change.

But what does this 'embracing' really mean? I've seen a lot of it lately. To some, disappointingly, embracing and being vocal about it, like starting a blog with lots of cute photos and many words that really cannot be said enough times, seems to mean that one hasn't accepted Down syndrome (No, seriously), to others it means putting someone on a pedestal built of Facebook likes and media attention who really just did what any decent human being should do, such as happened in the case of the Houston waiter who refused to wait on a family who didn't wish to eat in the vicinity of a family whose child had Ds (for reals), and to yet others it means glossing over the condition with such language and attitude that no one is left wondering just how big of a cross to bear a person with Down syndrome is to a family not "safe", but expecting a child with T21 as is evident from this segment on the Today Show (and they have a medical 'expert' who doesn't even use people first language. Geez).

For me this (pointing at the blog, not at the above paragraph though, and then pointing at someone's toes, but that's a whole other non-post) is embracing. What I'm doing right here. Not giving up on awareness and spreading it. Sometimes with pretty pictures, sometimes not, but with plenty of token (not) advocacy. I may not be so aware of my kid's Down syndrome, but other people sure are. Yesterday at the hospital, while sitting outside the lab holding Babe and minding our own rather spit-y patty-cake, we were made from across the waiting room. This time around the person who'd spotted Babe wanted to be near us and talk to us because she too had a kid who has Down syndrome and she needed some positive vibes for the open heart surgery her daughter is having as we speak (so yeah, let's send some. Right now), but there have been other times where someone has spotted Babe and instead of embracing her as a regular toddler, has either made allowances (She knows how to wave hello and good bye and she should do it at the end of Story Time when all the kids do it), or assumed that she has glasses because she has Down syndrome (yes, that makes you nearly blind now too), to give a few examples. I know that sometimes allowances need to be made, accommodations will happen, but they should come after the fact, not pre-emptively due to low or no expectations, and I realize that Babe's poor eyesight can be linked to her having Down syndrome, but the route the observer takes should be more complex, and perhaps allow for her having bad eyesight just because, like in the case of that other kid, who wears the same glasses that Babe does, +6 prescription and all, but doesn't have Down syndrome, and just has bad eyesight, just because.

So I guess I'd like my genes and parenting skills to be at least equally blamed for Babe's shortcomings as Down syndrome is, perhaps even more. You know, embracingly.

Because I am guilty.

So if you're out to do some embracing, join us, like our Facebook page, spread the word, and feel free to blame me, in all senses of the word. There can never be enough advocacy. Thanks. 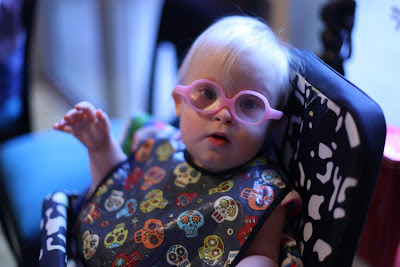 Posted by Extranjera at 2:03 PM

Email ThisBlogThis!Share to TwitterShare to FacebookShare to Pinterest
Labels: all the cool kids have glasses, Down syndrome uprising, Guilty as charged, we also swear a lot in our revolution which is one of the perks, yo mama