In the past few weeks I've been told that I'm a "pearl clutcher", that I should just "untwist my panties", and that I'm being "too sensitive" when I haven't felt that insults and belittling expressions, retard and tard, should have a place in our everyday conversations. I've also been called a "fucktard" for (politely) objecting to the word "douchetard".

Because someone thinks that saying fucktard will get him more laughs than saying fuckdink? Or because someone feels so strongly that the person they were ripped to pieces by needs to be called a douchetard and not ever a douchecanoe? Or because a person is so unimaginative that they cannot make a Palin joke any other way than referring to her as retarded?

What is this love affair with one word? Why are people so ready to defend their use of it? If you're out to insult someone, as seems to be a popular pastime, why not get creative? Why choose the one word, in any of its permutations, that singles out an entire group of people, a group that already has it pretty damn hard in today's society, and represents the members of that group as

mistakes
slow
broken
despicable
unfortunate
disgusting
strange
funny, but not the good kind
and
less than everyone else on this earth.

Because that is the long and short of it. It is language of oppression, hate, and discrimination. It is. It does not matter how much you are not pointing at my child when you use the word, you're still demeaning her, and others who have intellectual and developmental disabilities.

It does not matter that you also have a child with a disability but are not bothered by the words unless they are directed at your specific kid. You are aiding the language machine of inequality by not speaking up and attempting to make a change.

No matter how much we wish to do so immediately, the word 'retard(ed)' and its permutations cannot yet be understood as divorced from the concept of intellectual disability. A better case can be made for former classifications: idiot, moron, imbecile, but even they now carry added meaning, at least for this mother. There is no way for the parents to 'own' or 'take back' the offending word for their children. Someday, doing that may be possible for people with I/DDs, but as for now, they're not interested.

I know there are many things that need to be done and achieved for true equality. Things that require lobbying, funding, legislation, and hours upon hours of activism and advocacy. However, I also know that a change in our everyday language, and viewing certain types of language not as "free speech" but as language of oppression and hatred will help to undercut the persisting bias to see people with Down syndrome, or any intellectual disability as not quite human enough to be worth our trouble.

Again. I'm not asking for your money or even your time. I'm not asking for you to like me, or even be considerate of me. I'm not clutching my pearls in horror and asking you to stop swearing. I'm not being the "word police" or treading on your "rights". I'm asking for the tiniest, smallest speck of respect for a huge group of people. For your neighbor, that boy in your kid's school, your sister, your colleague, the driver behind you, that girl on Glee, and for a group of people that you might one day be a part of.

This is not about my sensibilities.

Make a choice. Use language of equality. Teach your kids that language has power. Weigh your words. There may come a time someone needs to be called a giant bag of assholes, and that's just fine. Assholes won't mind. And people with intellectual disabilities will not be the butt. 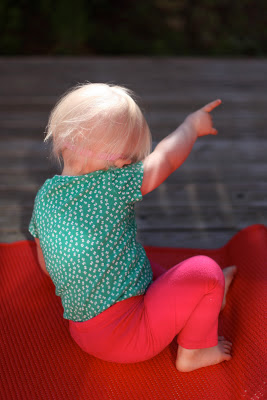 My kid. Leading the charge.
Posted by Extranjera at 2:07 PM

Email ThisBlogThis!Share to TwitterShare to FacebookShare to Pinterest
Labels: beyond awareness where grass is green and avocados are ripe and you never hear the word retarded or they're always so happy, I can't believe I'm writing yet another post about language