Dear expectant parent with a prenatal Down syndrome diagnosis

I won't say that I know how you feel, because I don't. No one does.

To say that, would be unfair and dismissive of your feelings. It would suggest that my path would be your path too, when the truth is that there is no one solution. No one way.

However, what I can say is that I've been where you are now and that you are not alone.

I too was presented with a diagnosis. Mine came at 13 weeks of pregnancy, in the form of a grainy copy of FISH results from a Chorionic Villus Sampling. A couple of dots on a chart highlighted with neon-yellow. One line of text on the bottom.

"Female with Trisomy 21," the paper said.

It wasn't a big surprise. My husband and I had agreed to the CVS because an ultrasound had revealed that the fetus, my daughter, had edema and there was a cyst on her neck. The doctor was almost certain there was a chromosomal variation.

I had asked the doctor about termination and my rights (we were living in Mexico) prior to receiving the specific results, and in that smallish conference room with someone's laptop charging in the corner, I was presented with a choice: My daughter had Down syndrome and I could either terminate the pregnancy or continue.

The doctor would support whatever decision we made and either organize an abortion or bring in a geneticist.

To say that there was no choice for me, would be to tell a lie. I am pro-choice. I try to live ethically and with compassion. So I weighed my options. I was happy to have a choice. An informed choice. I considered and still consider myself one of the lucky ones. Not every woman gets to decide over their own body and life. I know I'm privileged.

In the week that had passed from the ultrasound to receiving the diagnosis, I had read everything I could find on Turner syndrome, Trisomies 13, 15 and 18, Cystic Fibrosis, and Down syndrome, although I'd felt I was already somewhat aware of the realities related to the last possibility. For my husband and I there was no fear, no unknown, just a fork in the road. Together we made a decision.

We, the adamantly atheist, educated, and rather rabidly pro-choice couple, felt that life with Down syndrome was no better or worse than a life without. Our daughter's life would be what we and she made of it - good, bad, brilliant or not, only time would tell.

We had decided we wanted to have a child. For us, that child having Down syndrome did not change our intent. I had read enough to know that life could and would be good, as normal as it ever was going to be for us, strange, unprecedented, wonderful, mundane, awkward, boring, exceptional, and everything in between.

Somehow, her having Down syndrome just added to the idea of her unique existence. While we were aware of the list of potential health issues related to Down syndrome, we were even more keenly aware of the fact that life in itself came with a laundry list of potential health issues, and that no one had ever escaped living without dying. Eventually. We understood that intellectual disability and developmental delays had nothing to do with worth, value, humanity, or what it means to be happy or lead a happy life.

We still feel the same.

I will not insult your intelligence by telling you that this diagnosis doesn't change the premise of your pregnancy or try to convince you that it shouldn't. Your mind might have already gone from wanted to unwanted. What I will tell you however, before you decide one way or the other, is that you should do so only after trying to understand what it really means to have a child with Down syndrome, and more importantly, what it means to have Down syndrome, what your child's life could and would be like. Look beyond the stereotypes, the list of 'what could go wrong', and the ignorance of those who will tell you that you'll end up with a child who'll never grow up. Attempt to find the reality. It's worth it, I swear.

What I will also tell you is that I know of no better feeling than the love I have for my kid, the feeling I get when she laughs at my singing, the warmth of her hand in mine when she's reaching for something new she's not quite sure about, the pride I have in her when she trots out into the world, fearless and fierce, and makes that world hers. She is everything to me and her father. She is the coolest, most excellent person I have ever met and I doubt that'll ever change.

She is our love. In her I found the meaning of real, earth-shattering love. But only because she is mine.

May your life be as happy as ours. 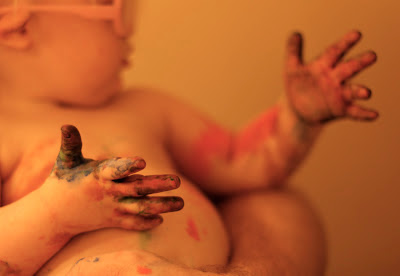 Email ThisBlogThis!Share to TwitterShare to FacebookShare to Pinterest
Labels: Don't tell me how I feel, Down syndrome pregnancy, I love her more than words can express, Life is, prenatal diagnosis, Trisomy 21 pregnancy