During this month of awareness about Down syndrome many of the better pieces of advocacy (note: not awareness)  I've read have been about unique humans, about being and becoming oneself, about difference within similarity, and about individuality. As an antidote to the homogenizing rhetoric, sweeping generalizations, and the unfairness that is the stereotyping all too ubiquitous, this is good. This shift in rhetoric when talking about people with Down syndrome is getting us closer to finding true acceptance into the ranks of unmarginalized humans for people who happen to have Down syndrome.

The short answer that suits my purposes for this post, to all of those questions, and the point I intend to make, is that it is NOT the number of chromosomes in a person's cells.

Having Down syndrome does not make a person unique, or extraordinary, any more than having strong fingernails, or a high intelligence quotient does.

Having "an extra chromosome" (are you as tired of this expression as I am? I hope so. It's not extra, it's a third 21st) will not mean one is a 'daisy in a sea of poppies', it doesn't mean I, as a parent to someone with Ds, suddenly found myself vacationing in Holland when I thought I was on my way to Italy. I've actually permanently relocated to a different planet altogether, called parenthood, and I understand that on this planet no one has an identical cottage-pod to ours, there are monsters - big, small, many, or few - in everyone's backyard, and happiness comes in many forms.

My nationality is part of my identity, but it's far from what makes me unique. It's only a tiny part of my identity in my everyday life, and only sometimes do I let it swell to a size that others can recognize. Lately really mainly when excellent school systems in the world are discussed. At those points, I'm a FINN. Sometimes I use it to add to my quirkiness, other times I use it to almost justify my actions. But however I choose to utilize this piece of my inner being, the fact remains that I choose how I project my identity out into the world.

While I can't say how my daughter feels about her Down syndrome as part of her identity - she's a toddler, I doubt she knows what Ds is, most times I doubt she knows what a hippopotamus is, let alone something as interesting to a 2-year-old as identity - I'm pretty sure she'd rather not be just Down syndrome. In every single encounter ever, or even most. I'm just guessing here, but like most people I know, she'll likely grow up to embrace and reject, ignore and include, in ever-fluctuating ways, all of the varying facets of her specific humanness at her disposal.

Not facets under an overarching umbrella of Down syndrome.

She might grow up proud to be a Finn, a Dane, or a Mexican, all of those elements of an identity being at her disposal. She might mesh the three. She might embrace her multilingualism or reject it and prefer one language over the others. She could wish to have brown eyes and curly hair or delight in her wispy locks and blue eyes, or she might change her opinion on her looks on a daily basis. She might be quick to speak her mind or prefer to stay silent, observing. She might find herself feeling naked without her glasses or think that they're too much of a hassle. She might want for people to think of her as an artist, an athlete, a regular Joan (or a Joe, or, well, person), or nothing even remotely like that. There might be times her having Down syndrome could come in as an important unifying facet, and times she'd wish it away from under the gaze and awareness of her surroundings.

I can't know until she tells me. Neither can anyone else.

There could be and will be an infinite number of things, facets, parts, shards, elements, traits,  ingredients, qualities, and more that will play into what makes her unique. Not in the least the perception of another person. The interaction. The dance. In tiny ways we are born anew in each interaction. This is not news, but that this is just as true in the case of a person with Down syndrome, to many, just might be.

She is not the real her "underneath that extra chromosome."

When people say that they hate Down syndrome but love their child fiercely I find myself unable to relate, unable to even understand. I know that when they say this they're saying this out of concern, frustration, or fear, but I wish they'd understand that it isn't really Down syndrome they hate, it is the society that continuously works to disable a person with Down syndrome, beginning with what follows after some milestones are not met in a timely manner all the way to expecting proof of worth and humanity rather than regarding those as the starting point they are.

It would make me immensely sad had my parents hated the fact that I was born a girl. When I was born they understood that being born a girl in the society that I was born in at the time I was born meant that I would never be awarded quite the same possibilities, opportunities, or respect as a boy would, while more restraint and respect would be demanded of me simply because of my gender. They knew that I and them would have to fight harder for me to have what I deserved for being human and that they would have to attempt to change the way that the society worked, but they didn't for one second hate the fact that I would one day be a woman and not a man.

Because that would have been the same as hating me. 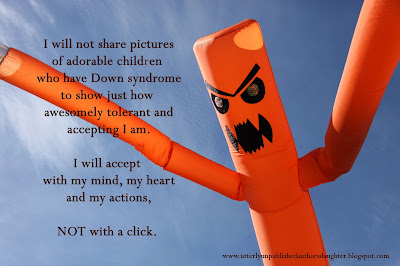 Not a photo of my kid.

* I realize that estimates of the global number of individuals with Ds vary.  I'm cool with this number for now though. Multiple sources and all that.

Email ThisBlogThis!Share to TwitterShare to FacebookShare to Pinterest
Labels: advocacy sadly has nothing to do with avocados, beyond awareness like yo, coffee for everyone, who has a soul anyway